Replacing the Audi A4 Variator: Detailed Information On Cost and Repair 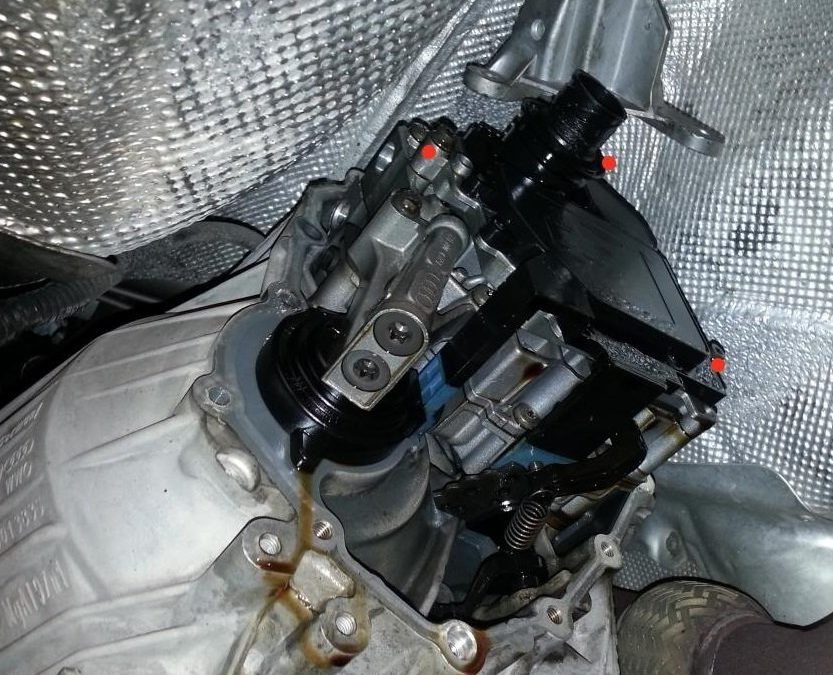 Audi was one of the first who began to complete the cars produced with a CVT gearbox. Over time, car owners have gained some experience in operating such vehicles. To date, repair or replacement of the Audi A4 CVT is not something complicated, this kind of operation is performed by many service centers. We will talk about the features of this procedure in our article.

Before buying an Audi A4 with a CVT gearbox, motorists ask themselves a question regarding its service life. The resource of the checkpoint depends on the operating conditions and the frequency of servicing the car. In some cases, problems requiring the replacement of the Audi A4 variator begin after 40 thousand kilometers, in others – the car passes 200 thousand km. The sensitivity of the box to operating conditions affects the attitude of owners to such cars.

Repair and replacement of the Audi A4 CVT is best done by an authorized dealer or service station. “Officials” should be contacted if the car is under warranty, since the cost of work is higher.

CVTs on Audi A4 cars

Audi A4 applies to mid-range vehicles with a longitudinally-mounted powertrain. A potential buyer can choose front-wheel drive or four-wheel drive. For the first time, cars were presented to the public in 1994, a series of updates were later made. They began to complete the new model with the Multitronic variator.

In the period 1999-2007 the cars were equipped with variable-speed gearboxes Audi 01J or Multitronic VL-300.

Installed on the model of a car with a longitudinal engine, the volume of which did not exceed 3 liters, they processed torque up to 310 Nm. Such boxes can be found on:

Car owners say that the newer the car, the more reliable the CVT installed on it. Initially, the Audi CVT control unit might need to be replaced after already 100 thousand kilometers. The reason for the failure of the unit was the oil in which the computer was floating. Lubrication during operation of the car was heated, destroying the unit. In 2003, the transmission design was finalized, which allowed us to cope with the problem.

For a CVT, overheating is dangerous, hot oil leads to failure of the control unit and irreversible damage to the solenoids-electric regulators.

For the box, the purity of the oil is more important. Dirty grease and a clogged filter lead to slow destruction of all transmission elements, which then require replacement.

If you drive in winter without first warming up the engine, then in the near future the clutches will go out of order, which will need to be replaced. A serious danger to the Audi CVT is towing other cars.

The tension of the drive chain most often occurs before the mileage of the car approaches 100 thousand km. It needs to be replaced during each overhaul, since even with slight stretching, the chain sliding along the cones can be broken, which leads to wear of the cones themselves and a drop in torque.

In addition, the Audi A4 gearbox is characterized by a sensitive differential, and therefore requires accurate control without sudden jerks, braking, etc.

Keep in mind that a failed differential is almost impossible to replace in a car service, replacement will be required for the Audi A4 variator as a whole.

Another common problem with Audi CVTs is the oil flowing through the axle shaft seals. You can cope with trouble by replacing the seals.

Experts say that checkpoint 01J is designed for about 200 thousand km. in case of regular maintenance, including replacement of gear oil and filter every 50 thousand kilometers. 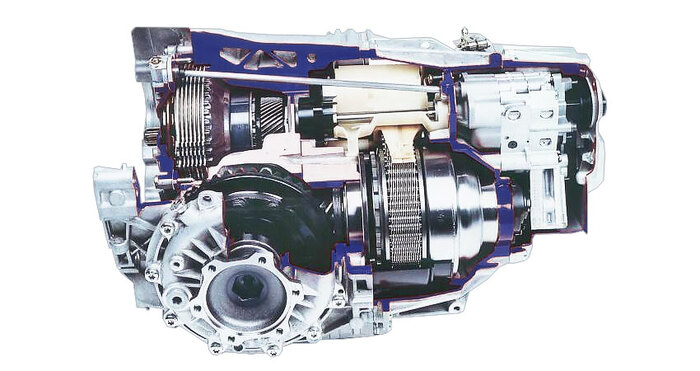 In the period 2004-2009 the cars were equipped with 0AN variators (Multitronic VL-380). A transmission transmitting a torque of up to 380 Nm was installed on a car with turbocharged diesel ICEs and V6 engines.

PPC 0AN equipped with:

The settling chips and metal dust clog the solenoids over time, the oil pressure decreases, the variator needs to be repaired with the replacement of all components.

A failed ejection pump and transmission fluid leakage are common problems that are typical of these Audi A4 boxes, which, fortunately, are quite easy to solve.

Stretching the chain is possible after 150 thousand kilometers, while it needs to be replaced as soon as possible, since otherwise the likelihood of wear of the variator cones increases.

Overhaul or replacement of the Audi A4 CVT will be required after about 200 thousand km, provided that the grease and filter are replaced every 55 thousand km. 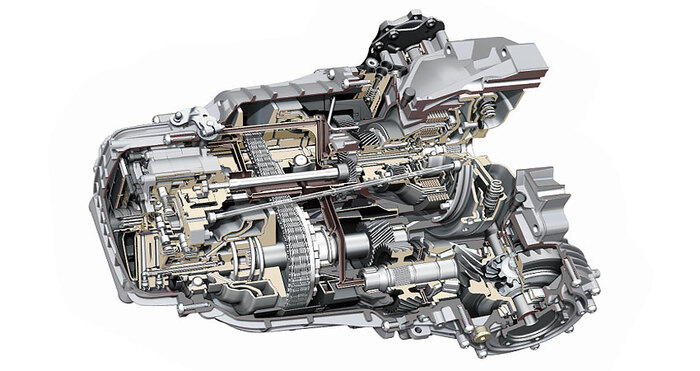 In the period 2007–2016 the cars were equipped with a 0AW / Multitronic VL-381 gearbox, after which the VAG concern ceased to produce stepless gearboxes with a pulling belt.

0AW, whose torque was 400 Nm (this is the maximum value for CVTs), came to replace the outdated Audi A4 01J CVT.

They were equipped with:

The most common CVT is 0AW for Audi A4 with a 2 liter TFSI engine.

This Audi gearbox allows for the use of a “sports” mode, which allows you to simulate an 8-speed classic hydraulic machine. Simulation occurs due to the use of the middle part of the cones and interruption of the transmission of torque. However, the service life of the drive chain when applying the mode is reduced.

During normal operation, the torque is still transmitted due to the entire surface of the cones.

These Audi transmissions feature a weak ejector pump and Teflon rings. The ECU valve channels clogged with dirty grease cause it to fail and the transmission to emergency mode. In some cases, the problem is solved by washing and cleaning.

The drive chain stretches for approximately 200 thousand kilometers, it needs to be quickly replaced, otherwise the cones can be destroyed. Cones cost about the same as the residual price of the car itself.

Towing a vehicle with a CVT is prohibited, as it threatens irreparable damage to the cones. 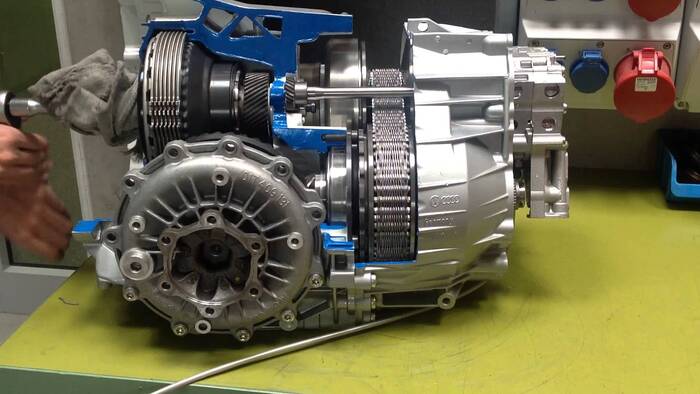 As soon as you notice that something is wrong with the box, you should immediately call the tow truck. But first of all, it’s worth dialing the number of a specialized service that deals with the repair and replacement of Audi A4 variators, and get advice by reporting symptoms of malfunctions. An experienced specialist will tell you what to do.

Long-term operation of a problematic variator threatens with serious expenses for its repair, and possibly replacement. For example, during movement, there is a possibility of a broken belt, a “jamming” of the pump and, as a consequence, subsequent overhaul.

The failure of the box can be judged by:

If at some point the car stops and does not move, then it is likely that the belt has broken.

First of all, they resort to computer diagnostics. Faulty mechatronics can be identified by errors reflecting the loss / decrease in pressure.

In the absence of errors, a transmission lubricant sample is taken. The clutches of the Audi A4 gearbox, when set on fire, give the smell of burnt oil. The amount of chips present in the oil is also evaluated. If it is insignificant, it is necessary to dismantle and disassemble the variator. After troubleshooting, look at the condition of the belt and pulleys, whether they need to be replaced.

Workers in a specialized service are aware of the main symptoms caused by a faulty belt, pulleys, starter pack, mechatronics and control unit.

The main causes of the Audi A4 gearbox malfunction are related to mechanics, more precisely, to wear:

Let us consider in more detail the wear of a chain whose resource is no more than 200 thousand km. Operation of a car with an extended chain will lead to serious damage to the cones and, as a result, to a significant increase in the price of repair work.

Sometimes it is possible to break off a very worn chain, in which case its parts, scattered along the transmission, can break the internal elements and clog the valve body. The cost of repair will increase at times, you may need to replace the Audi A4 variator.

For CVT gearboxes, overheated and dirty grease is a serious danger, therefore, oil and filter must be replaced every 50 thousand km.

In winter, driving an unheated car with a thickened gear lubricant will significantly increase the risk of failure of the starter pack clutches, which will need to be replaced.

Basically, the Audi A4 gearbox malfunction can be judged by electronic errors:

Another mechanical malfunction is the differential problem. It can cause such damage to the Audi A4 gearbox, the correction of which will require its complete replacement. Since the differential itself is a fragile mechanism, during the operation of the car should not be sharply accelerated and slowed down.

When operating an Audi, you may encounter problems such as damage to mechatronics boards immersed in hot oil. However, this malfunction is not common, more often repair or replacement is required by the solenoids in the hydraulic units of the variators, since the channels of the hydraulic units and the valve in them are destroyed due to the old, contaminated lubricant. Changing the oil in the Audi A4 CVT is a necessary procedure that extends the life of the box.

In the Audi A4 gearbox (multitronic 0AW), you may encounter the departure of the pressure sensor G-193. This is due to pressure differences, which leads to the error “Exceeded adaptation limit”. The gearbox data is self-adaptive during each trip, taking into account the pressure readings of the sensors. The error “Adaptation limit reached” most likely indicates a computer malfunction.

Repairing a VAG gearbox is expensive, regardless of whether it is 01J or 0AW. For overhaul of the 0AW checkpoint, you will need at least R23,000, depending on which spare parts need to be replaced. A completely failed pulley (cone), which cannot be polished, will increase the cost of repair work at times.

Repair or replacement of Audi A4 CVTs is best done at specialized service centers. Turning to non-professionals threatens with errors, the payment for which will fall on the shoulders of the car owner. For example, during an oil change, it is poured into the main part of the box, forgetting about the differential. Such an error threatens the complete destruction of the differential 0AW and its spurious gear.

Buying to replace a used Audi A4 CVT is strongly discouraged.

The used transmission can be installed on cars with a classic automatic transmission, which were released before 2005. Such boxes have a large margin of safety. Modern automatic machines and CVTs cannot offer this.

In addition, Audi A5 and A7 owners like to drive at high speeds. Therefore, a good residual life of a used gearbox cannot be guaranteed. The transmission itself will cost about R18,000. Mounting, lubrication and turnkey adaptation will increase the cost of replacing Audi gearboxes to R22,000. In this case, the guarantee will be only a month, and no one will vouch for further operation.

Repairing an Audi A4 CVT with replacing parts with new ones and a one-year warranty costs about the same, perhaps a little more. But at the same time, the transmission service life will be equal to the service life of the new box.

In service centers, the price for the repair of the Audi A4 CVT with the replacement of individual spare parts is approximately as follows: