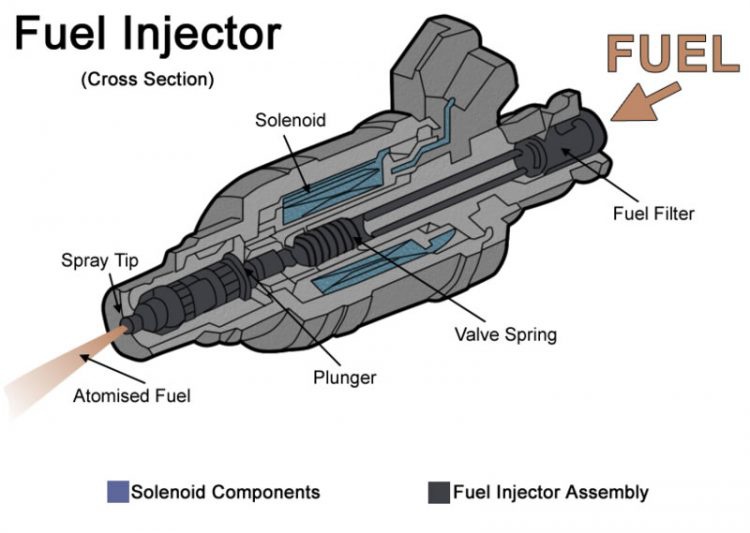 Uninterrupted operation of the engine is possible with a clean fuel system. If it is clogged, the car owner will face higher fuel consumption and difficulties starting the engine. For fuel injectors, timely maintenance is important, most often they only need cleaning and flushing to restore normal operation. In the article we will talk about what is the cleaning of fuel injectors.

Why do I need to clean the fuel injectors

The nozzles work as follows: an electric pulse from the computer enters the injector connector, activating an electromagnet winding (coil) and exciting an electromagnetic field. The field acts on the electromagnet in such a way that it moves and raises the sprayer needle above the seat, opening the nozzle. After the nozzle opens, fuel is injected into the intake manifold. When the action of the electrical impulse ceases, the compression spring returns the nozzle needle to its original position, stopping fuel injection. The pulse lasts about 2-3 ms. 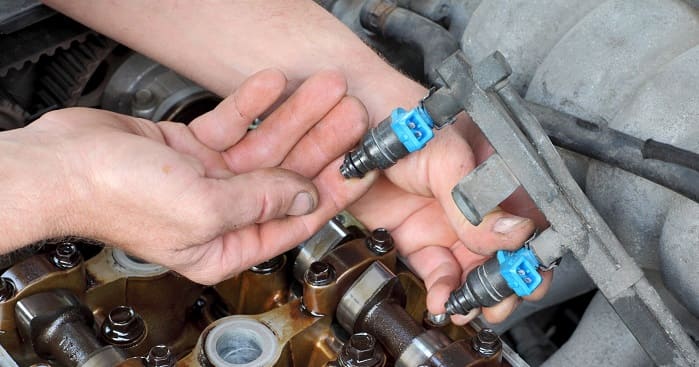 Combustible air-fuel mixture leads to the formation of resin deposits, which settle in the combustion chambers of the engine and nozzles of the injectors. Coke deposits contaminate the nozzles, narrowing their diameter and changing shape. As a result, not only the amount of fuel entering the internal combustion engine is reduced, but the spraying process is also changing.

The air-fuel mixture ceases to be homogeneous; instead, trickles of fuel enter the engine. It is possible to increase the concentration of oxygen or gasoline, which negatively affects the operation of the power unit, fuel consumption, etc. Due to the less efficient evaporation of fuel in the winter, the process of pollution of injectors is faster.

Noticing that a sharp press on the accelerator leads to jerks and failures in the motor, its instability at low speeds or at idle, as well as when the power is reduced and the fuel consumption increases, the condition of the nozzles should be checked. The listed problems may indicate their coking, i.e., strong clogging with solid combustion products, which impede the free injection of fuel.

Cleaning fuel injectors is not always able to cope with the problem. As the named symptoms can be caused by other reasons. However, flushing itself is a fairly simple and economical way to eliminate a possible source of trouble.

If the injector is sprayed incorrectly, the formation of the air-fuel mixture is disrupted – the fuel and air are mixed in the wrong proportions. The better the atomization, the smaller the droplets of fuel, the correspondingly, the contact area of ​​the fuel and air is larger, and the mixture formation is more efficient.

For spraying, its uniformity is essential. A sign of clogging of the fuel injector is jet injection instead of spraying the mixture. The formation of coke is caused by the combustion of resins contained in combustible resins. The worse the quality of the fuel, the higher their concentration in it. Cleaning the fuel nozzles can cope with coking and restore the normal functioning of the fuel system of the car.

The need for cleaning fuel injectors is indicated by:

The listed symptoms do not appear simultaneously. Most often, problems with injectors occur with a range of about 100 thousand km. The use of low-quality fuel contributes to a faster failure of injectors.

Fuel injector contamination can be divided into three stages:

How to clean the fuel injectors 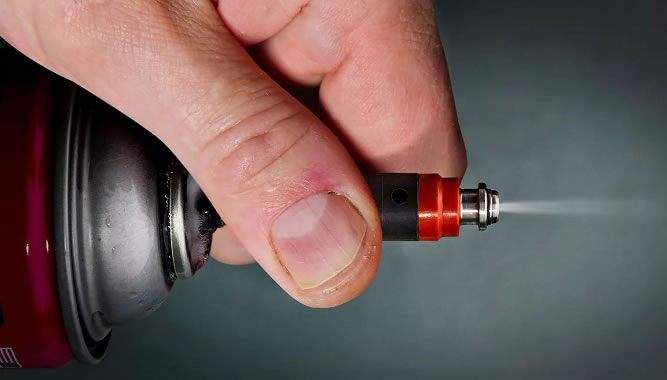 The nozzles can be cleaned by:

The most effective way is to manually clean the fuel nozzles with special fluids. Washing injectors on a special stand copes with pollution well, and you can use improvised means.

Ultrasonic cleaning of fuel injectors can only be carried out using special equipment, in addition, it is more aggressive in comparison with the use of flushing liquids. This method is effective provided that the coking of the nozzles is great and the fluid is not able to cope with it. Some experts say that when using ultrasound, the internal part of the elements is destroyed. Therefore, this method should be used only when others were powerless.

The use of additives added to the fuel for cleaning injectors without dismantling them is ineffective, and therefore is preventive. But for prevention, it is worth using additives carefully, since the “chemistry” in the exhaust gases affects the lambda probes not in the best way.

To perform the operation for cleaning the fuel nozzles, you need to stock up:

The effectiveness of various flushing fluids is approximately the same. Choose tools labeled Carburetor Cleaner, Throttle Cleaner, Injector Cleaner. It is better to buy a pair of small cartridges (250-300 ml), and not one large size (500 ml), since the pressure in it will decrease as the fluid is consumed. Two small spray cans can clean nozzles and throttle.

How to prepare nozzles for cleaning

Before flushing, the fuel nozzles must be removed. They are not attached to the power unit, but are pressed against the intake manifold using a fuel rail. 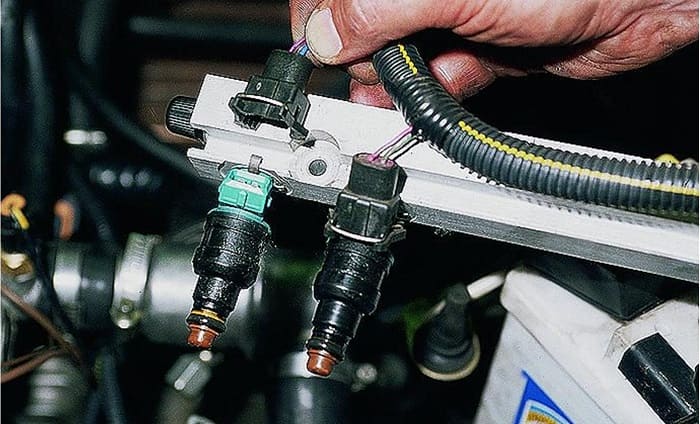 Nuts are used to secure the rail to the manifold. They must be unscrewed, the fuel rail with nozzles must be removed, carefully removing them from the bore holes in the manifold. After that, the injectors are removed one at a time from the landing nests.

Before removing the fuel rail, it is necessary to remove the hinged parts that interfere with its dismantling. The fuel line is disconnected from the nozzle connectors.

In most cases, a fuel pressure regulator is mounted on the fuel rail. You must either remove it from the rail, or dismantle the vacuum hose and “return”.

Areas where a fuel leak is likely (for example, the junction of the fuel rail and the line) should be covered with rags. It is better to start cleaning fuel injectors when the car has stood for several hours, in this case the pressure in the system will decrease, minimizing the risk of fuel leakage.

Before you start flushing, you must use a silicone tube to tightly connect the spray can with the flushing fluid to the nozzle. Tightness is needed, since the product must enter the injector under pressure.

The other end of the silicone hose is worn on the side of the nozzle that fits into the rail. Due to the elasticity of the tube, difficulties usually do not arise.

For flushing, it is necessary that an electric impulse is supplied to the injectors. For this purpose, wires are used. But some manipulations will have to be made, thanks to which electricity will flow impulse.

One of the wires is cut and supplemented with a button that will close the circuit, applying a pulse to the injector and open it. To close the circuit, the button is pressed, to stop supplying electricity, it is released. The second wire remains unchanged.

It does not matter which of the wires you will connect to the “+”, and which – to the “-” of the battery, which serves as a power source.

Keep in mind that the battery power is 12 V, while the nozzle needs only 9 V. In this regard, it is not worth giving an electric pulse to it for too long, this can cause the internal wiring of the injector to melt.

At one end, the wire connects to the battery, and at the other end to the fuel injector connector. Pay attention to the “+” and “-” marks on the injector body. Observe the polarity of the battery and nozzle.

Before proceeding with cleaning fuel injectors, it is necessary to remove rubber seals, a removable filter mesh from the elements, and also remove external contaminants from the injectors. Do not allow flushing agent to get on rubber elements, they can be deformed.

Now you need to place the elements of the cleaning installation and start washing the injectors. The photo shows how they should be located.

The cleaning process imitates the operation of the injectors, however, it is not the air-fuel mixture that is injected inside, but the flushing agent.

Flushing fluid under pressure enters the nozzle and remains inside until the injector opens. Having given an electric impulse to the nozzle, it is necessary to press the button to open it. After opening the element, the medium under pressure will be sprayed from the back.

See if spraying is even. The cleaning procedure must be performed until the spray is uniformly sprayed. If it initially had the correct shape, then the injectors were not contaminated.

Each fuel nozzle is cleaned for 2-3 minutes at short intervals. After flushing all injectors, repeat the procedure. During the cleaning of the injectors, the flushing liquid remaining in the first of them will corrode the remaining deposits, therefore, when re-flushing, they will be removed.

After the cleaning of the fuel injectors is completed, it is necessary to assemble all the elements in the reverse order. In the normal condition of rubber seals, they need to be greased and put in place. At signs of wear, they should be replaced. Deformed elements can cause fuel leakage or allow air to enter the fuel manifold. 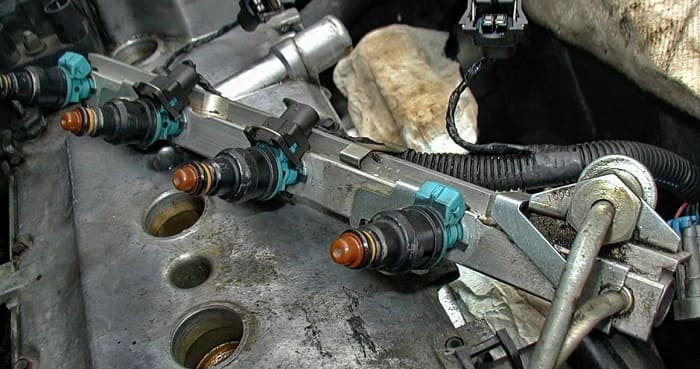 Having assembled the engine, you need to turn on the ignition in order to activate the fuel pump for several seconds and raise the pressure in the power system (you do not need to start a car). Ignition should be switched on several times, forcing pressure. After that, it is checked for leaks in the fuel system. In their absence, you can start the power unit. Most often, fuel injectors are cleaned simultaneously with flushing the throttle.